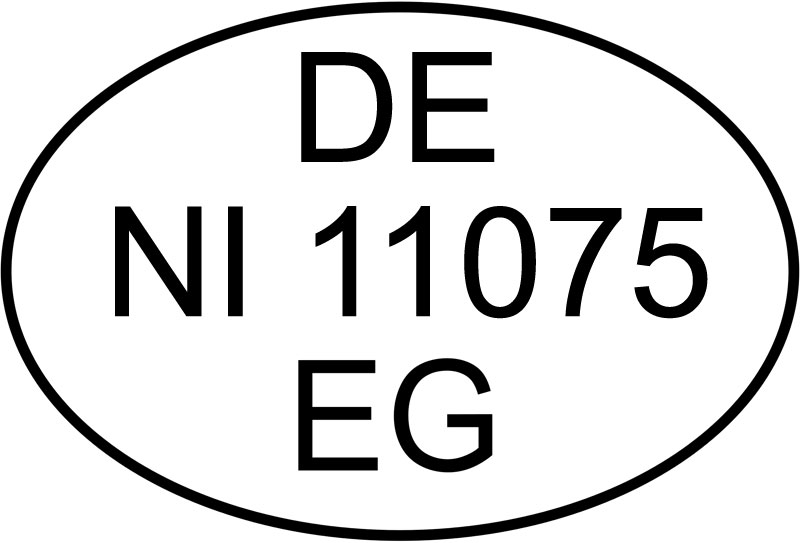 This EC approval number guarantees the hygienic and processing quality of our products.

... is the official term for an EU-wide symbol that is stamped onto officially inspected carcasses.

Food companies apply the identity mark to other animal products and/or their packaging.

Sometimes, the term health mark is wrongly used for the identity mark on packaging.

health and identity marks are granted by the responsible federal state approval authorities after inspection to verify that requirements are met (approval according to EU hygiene law).

The mark indicates that the company which last handled or packed the product works according to EU hygiene standards and is correspondingly monitored.

It is displayed on the packaging of all foods of animal origin (dairy, meat, fish, mollusc and egg products) and is mandatory throughout the EU according to EC Directive No. 853/2004[1][2].

The mark often indicates "bottled by:", "packed by:" or "best before:". Exempted from the marking obligation are exclusively animal products produced or processed in retail companies (e.g. butcher's, supermarkets, catering, canteens), and only such companies are exempt from the approval obligation.

Another exception from the marking obligation is for fresh eggs which are marked according to market law.

... is not primarily intended for the final consumer but for the monitoring authorities and trade partners. The marking makes it possible to trace the production company, but not the origin of the raw ingredients. This is only possible when a geographical origin mark is used. For instance, "Irish butter" must be produced in Ireland, even if it is finally packaged in Germany.

The German General Administrative Directive on Food Hygiene (AVV LmH) of 12 September 2007 newly and uniformly regulated the approval number in Germany for all the various types of companies.